A lot of my time is spent helping 'newbies' learn the basics of living in the Middle Kingdom like ordering food, taking care of life's daily necessities, and learning how to cross the street.

It also involves helping them take their first steps in language learning.  Fortunately, most people who come to China are (initially at least) very eager to learn as much as they can. As newcomers, they are constantly picking up new words and phrases, so I will invariably get the question, "Zhou Laoshi, what does X mean?"

If you are proficient at all in Chinese, you will know understand the unhelpfulness of a question like this for a language that has 50,000 written characters, but only slightly more than 400 ways to pronounce those 50,000 characters.

When faced with such a question, the first thing that pops into my head — that MUST pop into my head is — "well, which X are you referring to?" I rarely ask that question directly because I'm 99% sure they don't know.  They are most likely just asking me about a sound or word they heard and for some reason they are curious as to the meaning.

In order to ascertain the meaning of the word in question, though, we have to know which character it is, since meaning in Chinese is carried by the way a word is written, not the way it sounds. And since there are only 400+ sounds, the word they are inquiring about could be any of a handful, dozen, or hundred different characters.

Take the word (sound) ju, for example. My Wenlin Chinese software program indicates that there are 158 different characters that are pronounced ju. And to make it even more fun, many of those characters have multiple meanings.

Here are just a few of them…. 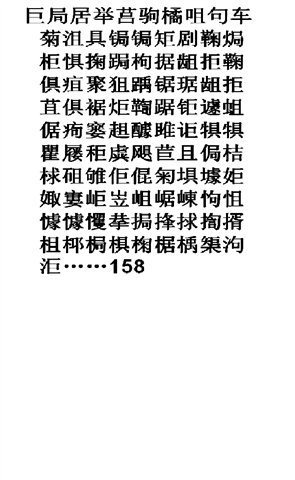