While I was in the US last month, one of the projects I worked on was scanning old photos and slides from my earlier life in China.  It brought back lots of memories (mostly good), and triggered reminders of forgotten adventures. I've enjoyed bringing them to 'new digital life' and thought it would be fun to share them as well. I plan to post at least one old photo per week, along with it's accompanying story. 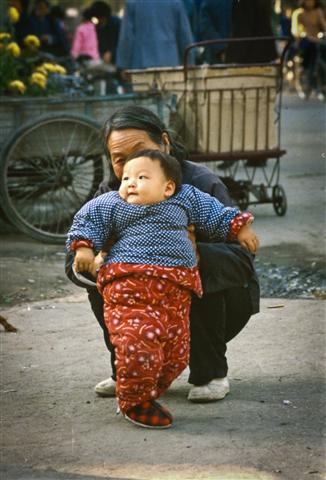 I took this photo the first week of October 1984, somewhere in Henan Province — perhaps Kaifeng. To commemorate the 35th anniversiary of the founding of the People's Republic of China, the Foreign Affairs Office of the province had taken all the foreigners in the province (maybe 40 of us) to see some of the sights around Henan.

I spotted this adorable kid being being propped up by his (her?) grandmother. With all those layers and padding on, he kind of reminded me of "The Michilen Man."

The more interesting thing about this, though, is the fact that the temperature was somethingl like 95 degrees when I took it! I couldn't imagine how that kid was surviving being all bundled up like that.

It was on that day that I learned that in China one dresses according to the calendar, not the temperature. October 1 was the day for donning layers in preparation for the coming winter. The ancestors had issued the decree and it was not to be challenged.