When I was at home over Christmas, I went through some of my photos from 'my early years' in China, and got some of them digitized.  It was a fun detour through the good (??) old days in China.

Here's a fun one I ran across… 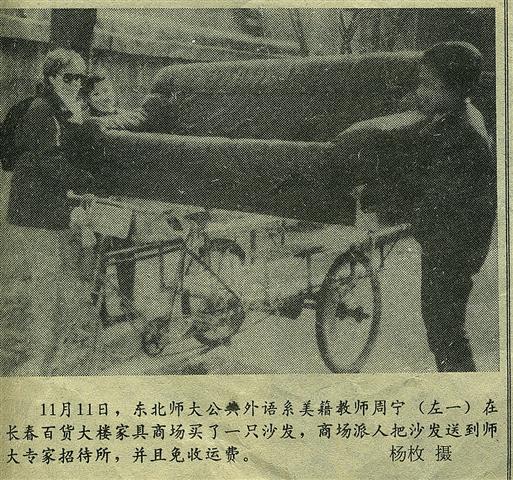 It's a photo that appeared in one of the local newspapers in Changchun (I can't remember which one) in November 1992 of a foreigner (that would be me) taking delivery of a brand new couch.

Believe it or not, in the early 1990's couches were very difficult to find in China.  The main piece of 'sitting furniture' to be found in a living room were over-stuffed chairs, called shafa in Chinese.  They were usually naugahyde, shrouded by a light green cotton cover.  On top of that usually sat an orange and red towel.  They were not particularly comfortable.

Soft chairs were not part of traditional Chinese furniture down through the ages, so when they did start to show up, there was no word for them. Shafa is a transliteration of the English word sofa (sorta sounds like it, right?).  The combination of characters that make up this word have no real meaning. When couches started to appear, they were given the name chang shafa (long shafa)

By late 1992 I decided that I was tired of the towel-covered chairs in the apartment provided to me by the university, so I set out on a mission to find a couch. I wanted to be able to stretch out on the couch for a nap after a day of teaching or studying.  I knew they existed in town because a teammate had recently purchased one, thus providing me with the inspiration.

After several weeks of unsuccessfully scouring the various furniture markets around town, I finally ended up on the top floor of Changchun's Number One Department Store.  There were 4 or 5 couches to choose from, all of which, to my tastes were 'ugly to death.' It was clear to me, though, that if I wanted to have a couch in my living room, it was going to have to be one of these — the one which was the least 'ugly to death.'

I finally settled on the black naugahyde couch.  It wasn't pretty to look at, but was reasonably comfortable and beat out the others quite easily.The clerks in the store were extremely helpful and seemed excited about helping a foreigner buy a couch.  I'm guessing they'd never sold a couch to a foreigner before.  One gentleman in particular seemed particularly interested in what was going on and peppered me with questions — where was I from, where did I work, etc. Those are common questions in China, so I was neither surprised nor annoyed that he was asking them.

After I forked over my 300 yuan, we now turned to the matter of how to get the couch to my apartment. "No problem," they said. "We'll deliver it on a san lun che (three wheeled pedal-powered cart). Wow, this was going to be easier than I thought.

I accompanied the workers as they hauled the couch down the stairs (all 7 flights) to the waiting three-wheeler outside.  We got the couch strapped to the cart and I told the driver where to take it.  He was afraid that he wouldn't be able to find my place, so suggested I hop on the couch sitting on top of his cart and just direct him there.

Now, in the early 1990's in Changchun a foreigner could draw a crowd just by standing on the side of the road so it wasn't hard to imagine the bedlam that would break out at the sight of a foreigner sitting on top of a couch on top of a three-wheeled cart being ridden through the streets by a Chinese worker.

I declined is offer and told him I'd take the bus and meet him there.

45 minutes later, he showed up at my place.  To my surprise, Mr. Friendly Questioner was with him, this time with a camera in his hand.    He asked if he could take a photo of me, the cart driver, and the couch.  Now I was getting suspicious. I asked him who he was and why my purchase of a couch had become his business.  He told me that he was from the PR office of the department store and he wanted to 'document' the work of the store in providing such good service to a customer, especially a foreign customer.  That seemed like a reasonable answer, so I said sure.

Later in the week, my Chinese tutor showed up at my house with a newspaper in her hand.  "Hey, your picture is in the paper," she said. "The whole city now knows you bought a new couch."

All I could think of was that it must have been a super slow news day!