Ren shan ren hai is a Chinese 4 character idiom that means "a mountain of people, and an ocean of people."  In other words, lots of people.  And lots of people is something that this country has!  Whenever I'm engaged in a conversation with a Chinese friend (or stranger, such as a taxi driver) about some social problem that China has, the conversation will invariably end with the Chinese person sucking his/her teeth (a non-verbal that signals that there is a problem) and saying "there are too many people in China."  It always seems to come down to that.

The mountains and oceans of people were out in force this weekend to celebrate National Day. and here are a couple of photos to prove it.  The one on the left was taken at the Forbidden City (and you thought it was crowded the day YOU visited), and the one on the right was taken on the river front in Shanghai. 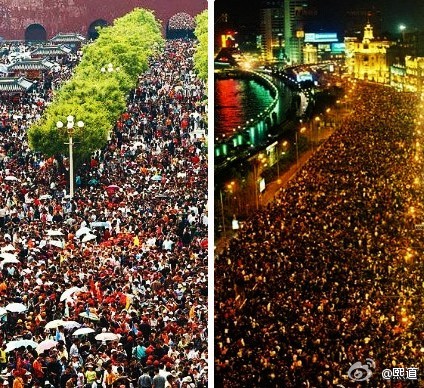