400 hundred years ago Jesuit missionary Matteo Ricci died at his home in Beijing.  In 1601, with the special permission of the emperor, he became the first foreigner to live in the city.

The Britannica Concise Encyclopedia gives this summary of his life and work:

Italian Jesuit missionary who introduced Christianity to China. From a
noble family, he was educated by the Jesuits, whose order he joined
after studying law in Rome. He volunteered for missionary work
overseas, arrived in Goa in 1578, and proceeded to China in 1582.
China's interior was closed to foreigners when he arrived, but his
willingness to adopt the Chinese language and culture gave him entry.
In 1597 he was appointed director of Jesuit activities in China. In
1599 he settled in Nanjing, where he studied astronomy and geography.
In 1601 he was finally admitted to Beijing, where he preached the
Gospel, taught science to scholars, and translated Christian works into
Chinese.

To mark the anniversary of his death the municipal government of his hometown in Italy is sponsoring a year of special events in Italy and China to commemorate his life and work.  This includes  a special exhibition on his life and work at the Beijing Capital Museum, titled "Matteo Ricci: An Encounter of Civilizations in Ming China." 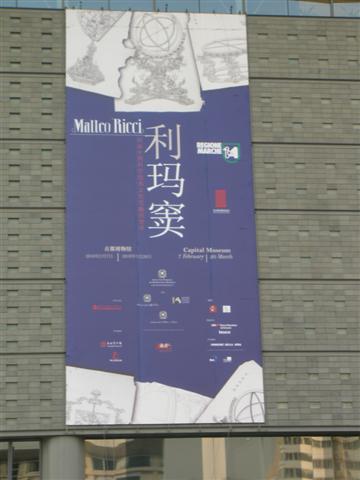 Given the, shall we say, troubled history between the Chinese government and the Catholic Church, the fact that such an exhibit is being held in Beijing is quite amazing. Some friends and I decided to check it out yesterday, to see how the life and work of a Jesuit missionary would be presented in the Middle Kingdom today. Here's how the exhibit is described:

" to recognize the human and intellectual adventure of a man who was the key figure in the development of relations between China and the west, as well as a strategic one for the promotion of cultural, institutional, economic, and commercial relations between the regional system of the Marche and enormous Chinese market."

It was all about free trade!!!  Who knew?

The quirky interpretation and emphasis notwithstanding, it really is a fantastic exhibit, and if you're in Beijing, you only have until March 20 to see it.  There are 16th century paintings, books, and other artifacts on display, as well as original maps and books written by Ricci himself. Among other things, he translated the Confucian classics into Latin. It's also interesting to follow his journeys in China as he moves from Macau to Guangzhou to Nanchang to Nanjing, then finally being allowed to settle in Beijing. 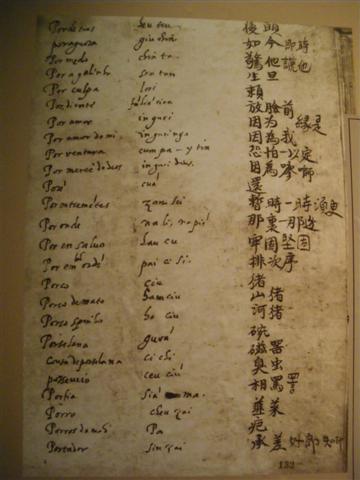 One of the most fascintating pieces was a Portugese/Chinese dictionary hand-written by Ricci when he was studying in Macau.  Ricci not only learned to speak and read Chinese, he actually wrote books in Chinese. My favorite line on one of the exhibit displays simply said "He hired tutors to teach him how to write books in Chinese."

Today we hire tutors to teach us how to go shopping in Chinese. 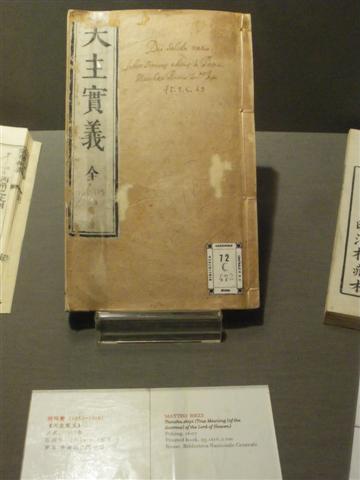 This is a book written by Ricci titled "True Meaning of the Doctrine of the Lord of Heaven." It's an introduction to Catholic theology.  Even today, Catholocism is referred to as Tian Zhu Jiao (the religion of the Lord of Heaen). 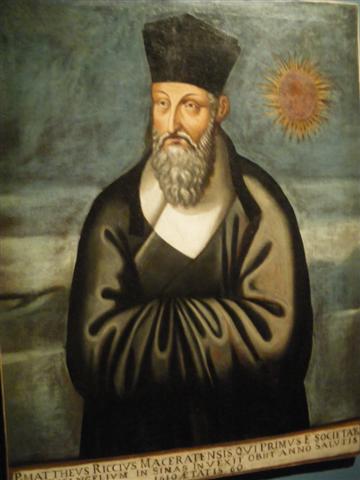 This is the original painting of Matteo Ricci done immediately after his death in Beijing on May 11, 1610 (he refused to sit for a portrait during life).  The painting was taken back to Italy immediately upon completion and this is the first time it has returned since 1610.

For more detailed information on the life and work of Matteo Ricci, I recommend this excellent summary at New Advent: The Catholic Encylcopedia.