I've spent the past 5 days in Taipei, Taiwan.  Following are ten random observations:

1.  It is definitely Chinese, but without the extra layer of surly socialist skin that covers the society on the mainland.
2.  People (at least in the service industry) are super polite, almost to the point of excess.
3.  Taipei is kind of like Hong Kong, only squashed.  There aren't that many tall buildings (compared to HK or even any Chinese city), but right smack in the middle stands Taipei 101, the world's tallest building.  Where did that come from?
4.  It's the least crowded Asian city that I have ever been to.
5.  The native Taiwanese language is the strangest thing I've ever heard in my life.  It makes me grateful that I was able to study Mandarin Chinese, which seems easy by comparison.
6.  The triangle-cut sandwich (vegies and mystery meat) seems to be the national breakfast food.  Ironically, the call it "American breakfast."
7.  There is much less English in use than on the mainland.
8.  The suburb where I stayed is the doufu (tofu) capital of Taiwan.  Guess what we had every meal?
9. It's nice to be in foreign land and not have a language barrier (Mandarin is the official language).
10.  What's not to like about a city where the taxi cabs are Toyota Camrys and the drivers wear neck-ties? 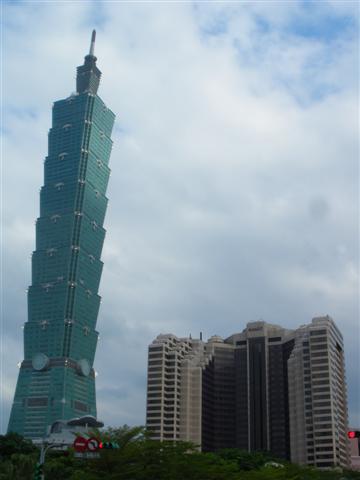 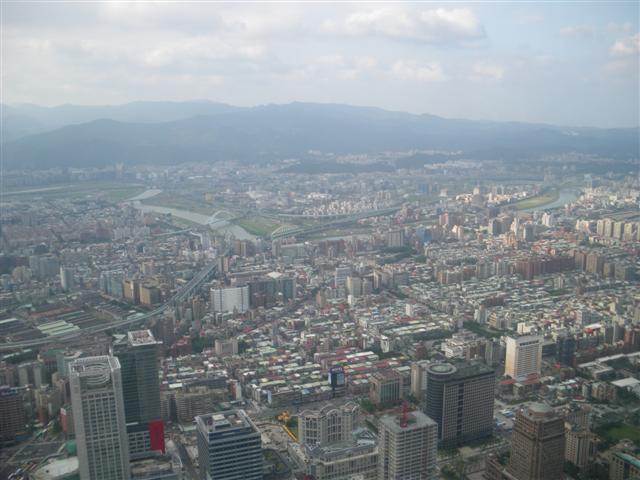 Taipei City, from the top of Taipei 101