I think I've found my new favorite place to 'office' — the Northwest Airlines WorldClub lounge at Tokyo's Narita airport.  This is the view I've had for the past 4 hours  while working away on a variety of stuff.  The reason I'm in the Narita airport all afternoon is that I am on my way from Beijing to Taipei.  Yes, I know, there are shorter and more direct routings between Beijing and Taipei (regularly scheduled non-stop flights, even!), but I opted to use frequent flier miles and pay 20 bucks instead of forking over 500 bucks to get there.  My FF ticket is first class, so I got to spend the day here in the lounge!  It's been a bit surreal listening to boarding announcement for my usual destinations from Narita:  Beijing…..Minneapolis, and not be running to catch one of them. Well, not today, anyway.  But next Monday, (after getting back from Taipei on Saturday) I'll be right back here at Narita, on my way to Minnesota! 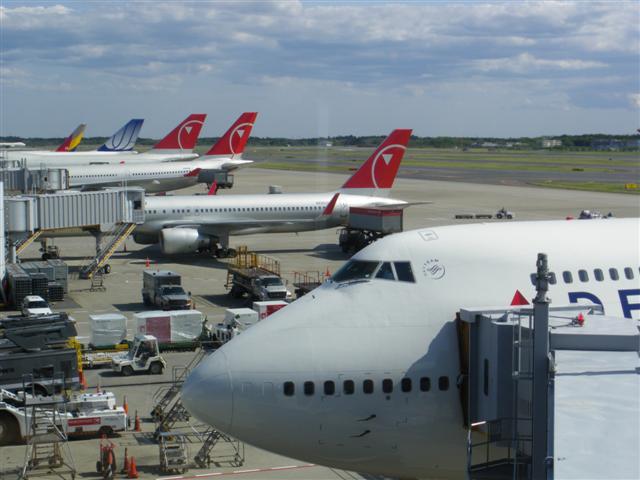 My main reason for heading to Taiwan is to speak at a conference, but I must admit that I'm most excited about spending tomorrow at the National Palace Museum, home to most of the treasures from the Forbidden City that were brought to Taiwan by the Nationalists (rescued perhaps?) in 1949.  After numerous visits to the Forbidden City in Beijing over the past 25 years, and wandering around the meager exhibits, it will be great to finally see what really used to be there.