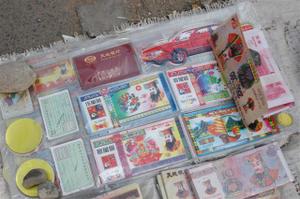 Today (April 5) is Qing Ming Jie, or Grave Sweeping
Festival in China.  It's sort of like Memorial Day in the US, but with more religious overtones.  On this day, Chinese are supposed to
tend to the graves of the ancestors.  This is done out of much more
than respect, but as a way of actually caring for and looking after the
departed ancestors.  In traditional Chinese folk religion, the deceased
enter the realm of the spirits, and continue to exert influence and
control on the living.  In other words, they're still there.  And in a
Confucian society, people have an obligation to not only worship, but look after
the spirits of the deceased.  One motivation is the
duty-driven notion of filial piety, that each generation venerates and
cares for the generation above it.  Another is a bit more pragmatic.
Since these spirits have powers, it's best to stay on their good side
by caring for them and their graves.

Besides tending to the graves of the ancestors, Chinese
traditionally used this day to send the deceased things they might need
in the afterlife, but that apparently are not available.  Money, of
course is the main thing.  So on this day, the living burned paper money that would be carried to the after world in the
smoke and ashes.  But since no one actually wants to burn real money,
there is special "hell money" that is sold in the days and weeks preceding the festival.  Hell money vendors suddenly appear
everywhere.  In modern times, it's not just money that is sent, but
other things the ancestors might need as well, such as paper cars,
paper bank books, paper villas, all of which are burned on the
streets in the evening.

All over town tonight, people will make small fires on the streets
to burn the money and things to send to their ancestors.  It's an
interesting contrast to the upcoming Fuhuo Jie, or "Return to Life Festival" that will be celebrated on April 11.