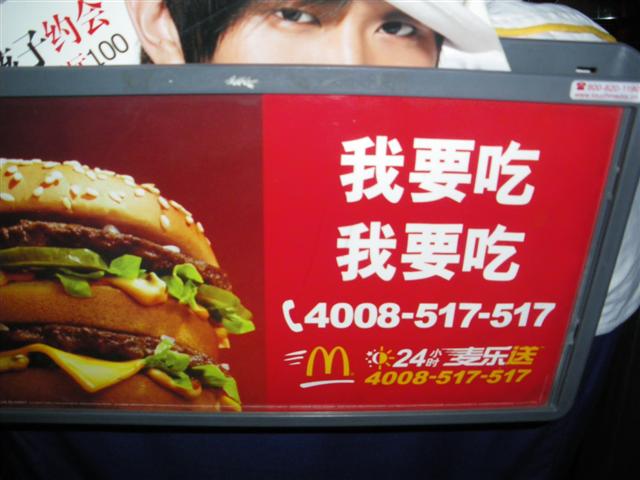 No, that's not a declaration of my permanent state; rather it is the new advertising slogan here in Beijing for MacDonalds new 24 hour delivery service.  I recently spotted this ad hanging on the back of a taxi seat.

It's really quite clever.  There are two lines of characters:  我要吃！我要吃!  In Pinyin, they would be written wo yao chi, wo yao chi (roughly pronounced 'wo yao cher, wo yao cher'). Below the characters is the number to call for MacDonalds delivery service, 4800-517-517.

This also reminded me a very funny story from back in the day when I was director of a program for Americans studying Chinese at a university in Northeast China.  As you can imagine, in language learning, there is no end to the funny stories of botched attempts at communication.  One of our students was riding a train somewhere, and was chatting with little children.  Her intention was to tell the kids that she had seven children herself, which would have been wo you qi ge haizi (I have 7 children).  Unfortunately, that's not what came out of her mouth.  Instead she said, with a loud voice and arms waving to make her point, wo yao chi haizi (I want–or like–to eat children), whereupon the kids ran away from her screaming.

Anyway, it's nice to know that if I have a Big Mac Attack in the middle of the night, all I need to do is dial that number and a guy in a ghostbusters getup will be here lickety-split!