Last week the government declared 08-08-08 to be a holiday in Beijing, so some colleagues and I decided to set out in search of the torch relay.  We set out at about 1030AM on bikes in the 90 degree/90% humidity weather, bound for the area to the west of the Old Summer Palace where we had heard the torch would be coming through.  We weren't really sure where we were going, but just thought we'd know when we spotted a crowd.

When we saw a long line of buses stopped on the road (due to a closure up ahead) we decided we must be headed in the right direction.  So did thousands of other people.  We pushed our way forward, getting within about 10 yards of the intersection that was blocked off. It was too hot and crowded, so we stepped back away from the crowd to just watch and experience the excitement.  Everyone either carrying a flag or wearing one or had one painted on their body somewhere.  I climbed up onto the step of a parked bus, hoping to catch a glimpse of the torch above the crowd.

Before too long there was a cheer from the crowd as a bus went by.  Then another bus.  Then a funny-looking truck.  Then another bus.  Then a fire truck.  Then that was it!!!  The crowd started to disperse!  What the…..?  I gave the ticket taker on the bus a puzzled look and she said 'it was in the special truck!"  We had biked through a sauna, and fought our way into a crowd to see a FLAME-MOBILE???   Apparently!  It was being transported to the Olympic Camp.  The next time it appeared, it was being carried into the stadium, and eventually used to light the giant torch above the stadium. 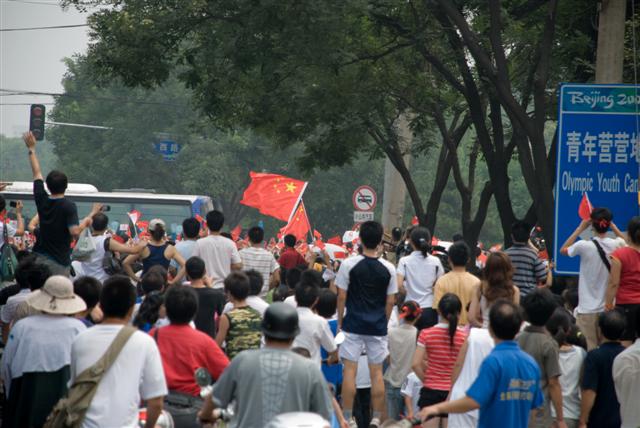 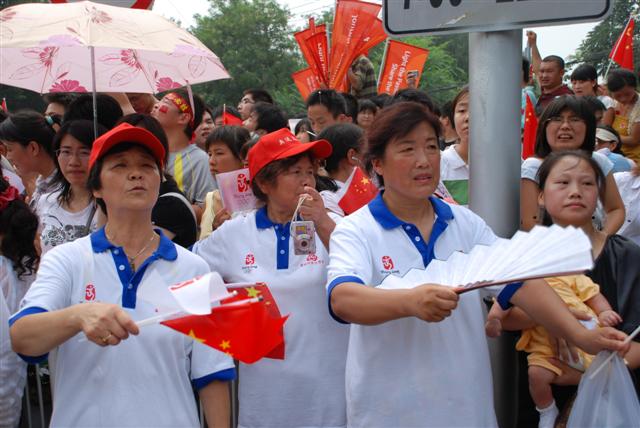 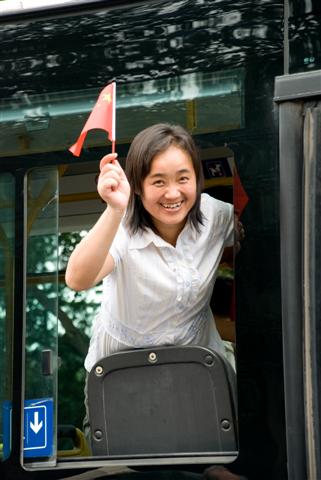 The ticket-taker on the bus, not at all bothered by being stopped for an hour