We got off at the Beitucheng station on the new Line 10, with plans to connect to Line 8 (what else), the dedicated line that goes into the Olympic Park. We dutifully followed the signs for Line 8, but instead of ending up on another train platform, we found ourselves outside–on a small guangchang (square) filled with eager beaver volunteers and fans trying to buy tickets.  While my friend tried to find out from a volunteer where in the world Line 8 was, a Japanese man spotted my ticket, came up and pointed at my ticket and said excitedly mai? mai? –sell? sell?.  His tones were terrible so he could have been saying mai? mai? instead, which means buy? buy?  It's an annoying feature of Chinese that the word for buy and sell are essentially the same, but said with different tones.  It didn't matter though because no matter what he was saying, it was clear that he wanted to buy my ticket.  I declined.

The happy volunteer managed to persuade us that it was best to take a shuttle bus to the tennis center since it was actually quite far from where the subway enters the Olympic green.  We decided that he knew what he was talking about and fought our way onto the bus, which was way too crowded with way too many sweaty bodies standing way too close to one another and a driver who was way too jerky in his driving thus throwing all of us sweaty bodies around like a bowl full of boiling jiaozi.  I can't say we escaped without injury because my friend got her toe stomped on by a sweaty tennis-crazed Korean.  10 minutes later we all managed to extricate ourselves from the bus and found ourselves at the entrance to the tennis center.  Only 15 minutes until the first serve.

The security was fast and thorough.  No weapons or explosives or stuff like that — all standard. On top of that, these Games have declared other things off-limits:  food, drink, and banners.  I had none of the above, but my friend had some grapes which were promptly confiscated.  Can't be too cautious, you know—those grapes might be tiny little banners that can be unfurled at inopportune times.  We quickly found our seats and were delighted to discover that we had hit the mother-lode of tennis talent.  On the court would be Rafael Nadal (#2 in the world) playing an Italian, Roger Lederer (#1 in the world) playing a Russian.  And for a bonus we would see Serena Williams (#5 in the world) play a Belarussian in a completion of a match that had been postponed the night before because of a deluge of rain.

It was great fun, but the host needs to have some serious points deducted  for the food. There's not enough of it, and the selections are lacking.  Basically the only food options are:  coke,beer, potato chips, candy bars, and boxes of cookies.  No hot dogs.  No popcorn.  No nachos.  The locals seemed happy enough, but the foreigners in the crowd were definitely looking hungry by mid-afternoon. 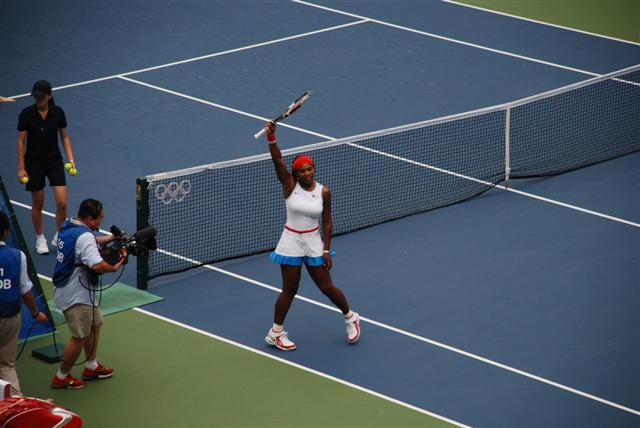