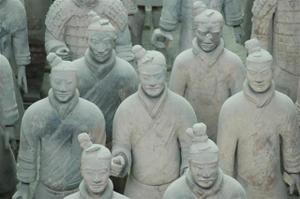 I havn’t posted much this past week because my cousin and her husband have been visiting from the States.  Tuesday and Wednesday we did the whirlwind tour of Beijing.  Wednesday night we took the overnight train to Xi’an to see the Terra-cotta Warriors.  Today they flew on to Chongqing to cruise the Yangtze River, and I flew back to Beijing.  I’ve got a fair number of fun stories accumulated, but no energy to write them just yet.  Watch this space.  In the meantime, enjoy one of my photos of the warriors.  Keep in mind that these were made, then buried a couple hundred years B.C. Their existence was not recorded in Chinese historical annals, thus they were forgotten…..until 1974, when a peasant digging a well near the city of Xi’an discovered a head.  The Antiquities Bureau was called in, and excavation began, only to discover thousands upon thousands of these soldiers buried to guard the emperor’s tomb.  It truly is one of the great archeological sites of the world.