This week I had the wondeful opportunity to travel to Ningxia Autonomous Region in western  China.  Ningxia is a Chinese province that gets "autonomous region" status because of it’s large population of the Muslim Hui minority.  It’s a small, desolate region that sits on the edge of several deserts, including the famous Gobi.  The Yellow River runs north through the middle of it, providing arable land for the population.  Most habitation is in the river valley.  I spent Thursday in the capital city of Yinchuan.  It was a fairly typical "small" city in China’s interior—fewer crowds, lots of heavy industry (thus air pollution), and because of its location in the desert, lots of dust.

On Friday I hired a car/driver to take me and a colleague to a town called Guyuan, 240 km south of Yinchuan.  We took the newly built (and still near-deserted) expressway.  Guyuan is a very small city in China–only 70,000 people.  Stepping into Guyuan is like stepping back into China of the 1980’s.  In a country that is developing at break-neck speed, Guyuan is easily 20 years behind (except for the area of cell phone technology of course).  It’s a remote, under-developed city where everyone has to work hard to eek out a livlihood from the harsh environment. 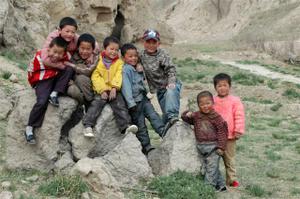 On Friday afternoon, my collagues and I took a stroll in a village on the edge of town.  Our destination was a gully that had remnants of cave homes.  We walked through the village on the ridge, much to the delight of the children.  I stopped to take their picture, and that was too much fun for words.  As we headed down into the gully, the followed us, shouting the whole time for me to take more pictures.  I’d stop and shoot a few, then we’d keep walking, our little shadows never far behind.  I called them the Guyuan Gang.

After shooting a few pictures, I decided to chat with them a bit.  Our conversation went like this(with children answering in unison at the top of their lungs):

Me:  Do you know that I’m a foreigner?

Kids:  WE CAN TELL BY LOOKING AT YOU!

Me:  What’s different about me?

Me:  Is it my hair that’s a funny color?

Me:  What makes me different from Chinese?

Me:  I talk different?  But I’m speaking Chinese!  Can you understand me when I speak to you?

Kids:  YES, BUT YOU TALK FUNNY!

I asked them if they could tell how old I was, but I might as well have asked them to explain to me the theory and practice of the American Electoral College.   That was just too hard!

Instead, I asked them if they liked to sing.  YES, WE LIKE TO SING!  I asked them to sing me a song, and after going into conference about what song, they came up singing about a little dove. They were such cute kids and followed us all the way out of the gully and village when we left.

Go here to see photos of Guyuan and the Guyuan Gang.