Sometime during the night last night, while this city of 14 million people slept, it "sanded." Now, I know that "sanded" isn’t really a word, but after what happened here last night, it really should be.  When snow comes out of the sky, we say "it snowed." Well, last night, sand came out of the sky—fine, powdery, golden-brown sand, the kind that looks something akin to powdered nutmeg sprinkled on top of eggnog at Christmas. I wonder what I would have seen if I’d gotten up in the night and looked out the window.  Sand floating down like snowflakes? I’ve never seen anything quite like it.  It was like the Gobi Desert decided to suddenly move east.

After a sandstorm here a few years back the papers reported that it had dumped 18,000 tons of sand on Beijing.  Last night’s was definitely worse, so I figure we’re talking at least 20,000 tons of new sand (not a few grams of which ended up in my lungs as I rode my bike to work).  It covered everything, just like a dusting of snow, except of course, this sand isn’t going to melt and go away.  It’s here, permanently added to the sand that is already in abundance in this city. Oh sure, sooner or later a wind will kick up and blow the stuff around.  Some might find its way further east to Tianjin, or even Korea, but most will blow around and fall right back down.  The word "futility" kept screaming in my brain all day long as I watched people wipe the sand off their cars, bikes, pets, and hair, and dutifully sweep the sidewalks and driveways.  What is that going to do? Just move it out of the way.  Face reality, folks!  That sand isn’t going anywhere, and there’s nothing we can do about it.  Below are some photos, one "borrowed" from the People’s Daily (link here), and two that I shot. 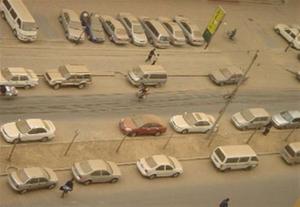 From The People’s Daily.  Kind of spooky, really. 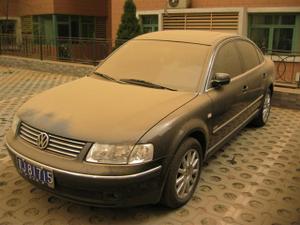 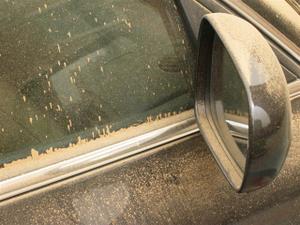