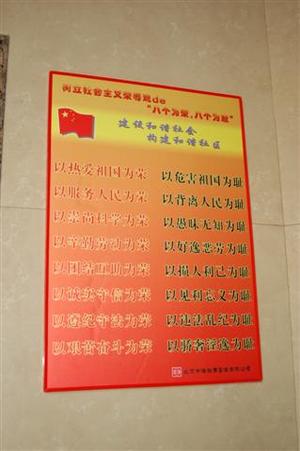 It’s springtime in Beijing, which means a number of things:   gorgeous cherry blossoms, nasty sandstorms, frigid weather indoors, and yes, a new cultural (political?) campaign.  I wrote about this one awhile back, in a post titled Do’s and Don’ts.  The Party has put out a list of 8 glories and 8 shames that are meant to be a definition of the New Socialist Values of china.   They’re encapsulated in 8 catchy 10-character slogans, that really don’t translate into English all that well.  After these were promulgated, the propaganda department got into full swing, and within a week, these were plastered all over town on—billboards, posters in schools, bus-stops, parks, banks, ….well, you get the picture.  The photo attached here is of the poster that’s in the lobby of my apartment building.  Even though this is a private development, they can now report in that they are duly in line with Party policy.

Chinese political campaigns soon take on a life of their own, as the apparatchiks and cadres try to out-do one another in demonstrating their love of whatever is being pushed.  In this case, one would think that discovery of these new socialist values is akin to the discovery of electricity, or Einstien coming up with the theory of relativity.

A local website has an interesting article about how music is being used to spread the word:

Even better are a couple of children’s chants that local schools are apparently using to enlighten their pupils on what it means to be a good citizen. There’s a clapping song that goes something like this:

And so forth. Anyone is welcome to translate the rest. The other widespread kids’ song recasts the eight pairs into kid’s song that’s more readily singable than Hu’s original formulation. But that’s not all – the New Socialist Values campaign is itself tied tied to songs. Neighborhood committees are writing and singing their own compositions, schoolchildren are composing rhymes, and the city of Beijing recently issued 550,000 free copies of a new book of kids’ songs to the city’s schools. Apart from the Eight Honors material, the books also have musical settings of the "Ten Civilized Actions for Middle and Primary Schoolchildren."     (go here to read the whole thing–it’s really quite amusing)

Last week I asked a cab driver what he thought about the campaign.  "Harumph!" he replied.  "Do they think we’re idiots???"