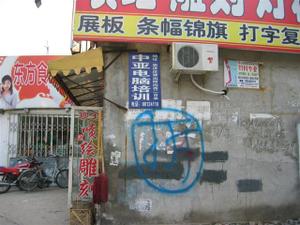 Well, it is finally going to happen.  The small "village" that is outside the gate of the school where our office is located is going to be torn down.  Since we moved our offices there in 1998, I have predicted every year, without fail (and with much certainty) that this will be the year the village is torn out to widen the road.  How it’s lasted this long I’ll never know, but it will be torn down within a few months.  How do we know?  The character painted in blue on the side of the store means "demolish," and it has now appeared on all of the buildings in the village.  The residents and store owners wake up one morning to see this scribbled on their buildings, and that’s that.  It usually means they have one month to get out.  With the Olympics only 2 years away, this is becoming a very common character around town.  In addition to many of the old parts of the city that are being demolished, these villages on the outskirts are going down as well.  The residents of these villages are, for the most part, migrant workers, peasants from the countryside who have come to the city in search of work and a new life.  In fact, my housekeep lives in this very village, and now she and her family are searching for a new place to live.  We also have a favorite restaurant that we go to often, which will have to move (not far, I hope). I suppose it’s an inevitable result of the development of a city (particularly one that is preparing to host the Olympics), but it is kind of sad to see these urban villages go.