I have just returned from a banquet at the Great Hall of the People, jointly hosted by the Minnesota State Government and the China Council for the Promotion of International Trade.  As some of you may or may not know, the governor of Minnesota, Tim Pawlenty, is leading a MN Trade delegation to China this week.  With 200+ along, it is the largest trade delegation ever by a US state.   I was priveleged to receive an invitation to the dinner with the governor and his wife tonight (along with 400+ others, so don’t be too impressed….yet) because I have done some training lectures for the Minnesota Trade Office a number of times over the past few years.   It was a typical Chinese banquet with speeches and toasts and slippery food from the bottom of the sea.  What was not typical was the setting—the Great Hall of the People, which is the closest thing that China has to a parliament building.  I have been to events at the Hall many times before, but it always seems an honor to attend something there.  In the Middle Kingdom, this is the very center!

The highlight of my evening was being introduced to Governor Pawlenty by the Director of the Minnesota Trade Office.  I got to chat with him briefly, and had my photo taken (but unfortunately it didn’t turn out!!!)  It was both a delight and an honor.

A big thanks to my friends in the Minnesota Trade Office who made it possible for me to attend the dinner tonight.  You know who you are!!!

As I said, the photo didn’t turn out very well, but with a little doctoring, I’m going ahead and posting it! 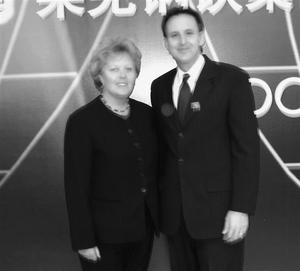 Just pretend like you don’t have your glasses on!