Another Newfoundland story. The day we went to St. Carols to see the iceberg that we’d read was in the little harbor, there was well-dressed man climbing around with us, taking pictures of the ‘berg. We struck up a conversation with him, and it turned out that he was the Provincial Minister for Tourism, Christopher Mitchelmore, in town for the annual Iceberg Festival. 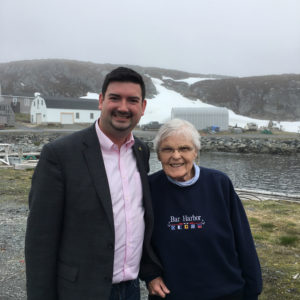 He was pretty surprised to hear that we had driven all the way from Minnesota (for the third time), and we assured him that were telling everyone we know that they should visit the province!

As we explored the area for the rest of the week, we kept seeing his campaign signs around town. He is the MP for the region we were in. 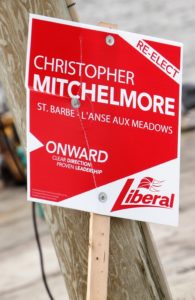 So, in the spirit of doing my part to promote tourism to Newfoundland, let me say that if you are looking for a unique travel destination, Newfoundland is the place.

The best place to start is the official tourism site for Newfoundland and Labrador. It was this site that I stumbled across a few years ago that got us interested in going there. More specifically, it was this page about Gros Morne National Park that sealed the deal!

You can fly to Newfoundland from Halifax, Toronto, or Montreal. The main airports are in St. John’s (east) Gander (central), and Deer Lake (west). Gander is the airport where US-bound flights were diverted to on 9/11. That amazing story is told in the book The Day the World Came to Town: 9/11 in Gander, Newfoundland, by Jim DeFede. That book then became the basis of the popular new musical Come From Away.

If you are driving, you’ll need to take a Marine Atlantic ferry from North Sydney, Nova Scotia to either Port Aux Basque, on the southwest coast, or to Argentia, in eastern Newfoundland.

Here are some other links that will help you plan, or at least inspire you to go:

Newfoundland and Labrador, by Lonely Planet