Yesterday, for the third time this year, I found myself on a flight to Los Angeles. And because I am a map and geography nerd, I always make sure to nab a window seat. 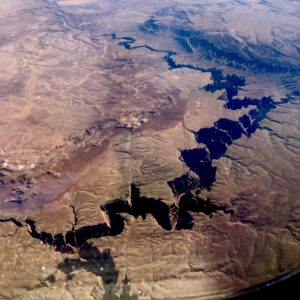 I am fascinated by watching the geography and topography change as we make our way southwest across the western half of the United States from Minnesota to California.

First there are the grid-shaped (and now snow-covered) agricultural lands of Minnesota and eastern Nebraska.

Those give way to the western plains, and eventually the Rocky Mountains make their appearance. On a clear day, you can see it all: Denver, Pike’s Peak, Teluride, Black Canyon of the Gunnison.

From there you hit the high (and slightly bizarre) deserts of southern Utah and northern Arizona.

What I spotted yesterday was the point at where the Grand Canyon begins….literally.

At first I saw a very normal Colorado River meandering it’s way in a westerly direction. It looked like any other river. And then, suddenly, as if the bottom simply fell out, it descends into a massive canyon, seemingly out of nowhere. 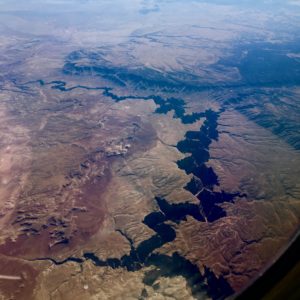 I couldn’t help wondering why, at that particular spot, did it start to carve its way deep into the land?

At any rate, it was a perspective on the Grand Canyon that I hadn’t seen before….the actual point at which it begins.

I love the window seat!

On a Wing and Some Duct Tape