On our previous trips to Newfoundland, we have taken the northern route, across the Upper Peninsula of Michigan, Ontario, Quebec, New Brunswick, and Nova Scotia.

To mix it up a bit, this time we opted to take the southern route, through Chicago (ugh), and across Indiana, Ohio, New York, Massachusetts, and Maine–finally entering Nova Scotia along the Bay of Fundy.

While the higher speeds on the freeways have been good, I can’t say that I am a fan of the fact that from Illinois to Maine the roads are, for the most part toll roads. As Minnesotans, we are not used to having to pay to drive on the highways.

With fewer exits (which make for more efficient travel), and only travel plazas to stop at, the drive has seemed very disconnected from the communities along the way. This was especially true in Massachusetts and Maine; the trees that line the highways are so dense, we couldn’t actually see anything. Our maps told us that there were towns, but we saw very little sign of them. Nevertheless, it has been quite beautiful.

Finally, how’s this for a great packing job! 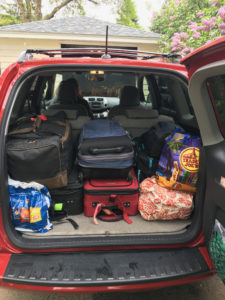