Like millions around the world, I watched in horror yesterday as the Notre Dame Cathedral in Paris was engulfed in flames. A building that has stood for centuries, and has survived wars, revolution, and Nazi occupation has been partially destroyed.

My initial thoughts turned to my own memories of visiting the cathedral with my family in 1970 during  our month-long drive around Europe.

Then, as you might imagine, my thoughts turned toward the bells. What happened to them? Were they destroyed too? Or, perhaps, had they been saved? 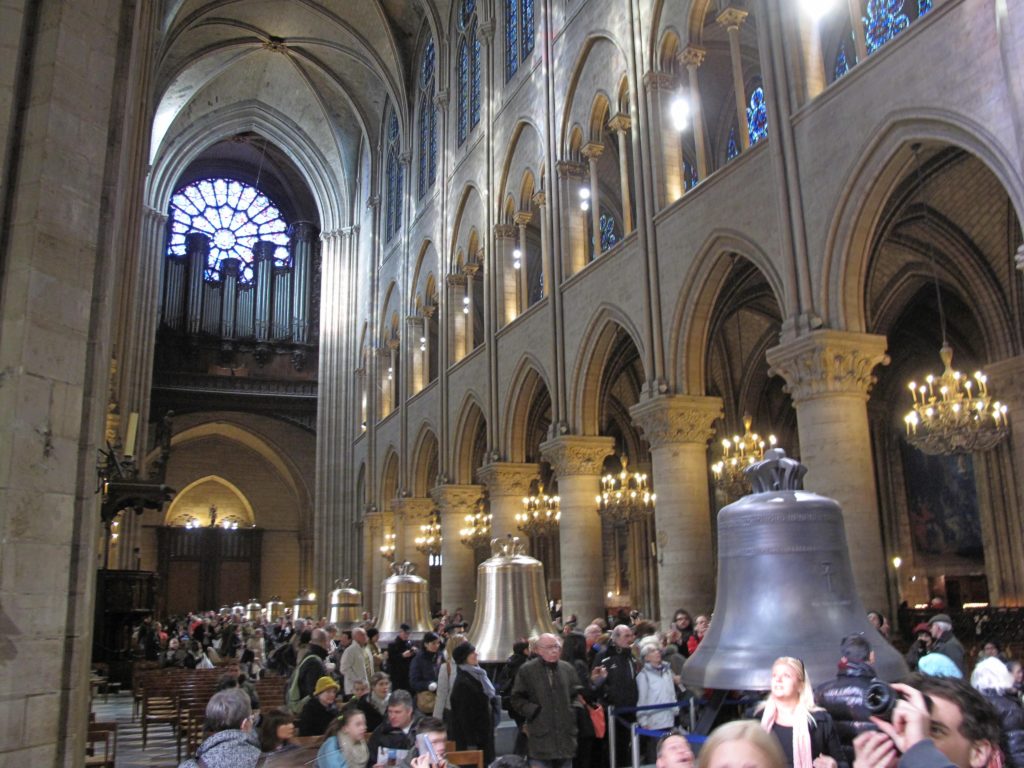 Joe Carter, writing at The Gospel Coalition, in a post titled 9 Things You Should Know About the Notre Dame Cathedral, has this to say about the bells of Notre Dame:

From 1856 to 2012, the four major bells atop the northern towers of the cathedral were rung every 15 minutes. They also rang for significant events, such as the end of World War I in 1918, the liberation of Paris in 1944, and in honor of the victims of 9/11 in 2011. The four bells—which were named Angélique-Françoise, Antoinette-Charlotte, Hyacinthe-Jeanne, and Denise-David, after French Catholic saints—were melted down and replaced by eight new ones in 2012. The reason for the change was to recreate the sound of Notre Dame’s original 17th-century bells.

And here’s an article from The New York Times (2011) about the project to replace the bells the 19th century bells in 2012:

The replacement of the bells in a $3.5 million project is part of a face-lift in preparation for the cathedral’s 850th anniversary next year that includes a renovation of the obsolete and energy-intensive lighting system and renowned organ.

Not all the bells will be replaced. The great 1681 “Bourdon Emmanuel” bell, which hangs in the south tower and is considered one of the most beautiful in Europe, will be preserved. It rings for major religious celebrations, popes’ visits, presidential funerals and commemorations. When Pope John Paul II died in 2005 at the age of 84, the Bourdon Emmanuel rang 84 times.

Finally, here is a video of the ceremony in 2013 to receive the newly cast bells on the 850th anniversary of the cathedral.

One presumes that the bells of Notre Dame are silent today. Hopefully not for long.

Published: The Bells Are Not Silent