One of the teenagers on the “Birthday Tour” last week, a 15 year old young man from California, told me that he loved China and wanted to stay here forever.

“What do you love about China?” I asked.

“Come on,” I said, “give me some specifics….what specific things do you love about China?”

“I love the traffic,” he said.

I stared at him blankly as he went on to list the other things he loves about China:  the food, the people, the culture.

I can assure you that in all my years of hosting visitors to China, no one has ever declared their love for Beijing traffic. Usually it triggers screams of terror and/or derision.

This conversation reminded me of a very funny blog post I ran across years ago describing the 12 steps required to make a left turn in Beijing. The blog site is called So I’m Going to China, and the post in question (from 2007) is titled Beijing Traffic Lesson: Left Turn. The blogger (a fellow Minnesotan) doesn’t post anymore, but I think this particular post is such a classic that we need to keep it alive. So, with all credit and kudos to Henry B, here is his post in its entirety. (And Henry, you should know that Beijing has added a thousand cars per day to the roads since you were here, so bedlam has not dissipated!)

As I may have mentioned before, traffic in Beijing is its own art form. The city is adding thousands of cars per – I don’t even know, week? Which means you have a healthy mix of people who have never driven before interspersed with people who should never be driving in the first place. To introduce you to the intricacies of Beijing driving, I will start with a relatively simple concept: the left turn. 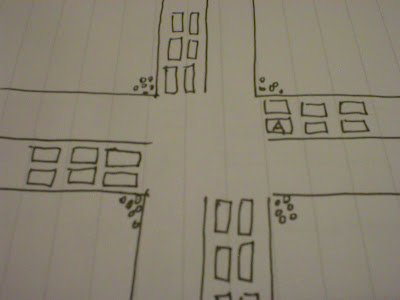 We see here a typical intersection. The light has just turned green for the east-west streets, and car [A], an enormous black Lexus with pitch black windows, wants to make a left turn into the southbound lanes. Pedestrians wait on each corner. (For purposes of this demonstration, we’ll assume no one is running the north-south red light, and no one is jaywalking – a rather large assumption.) 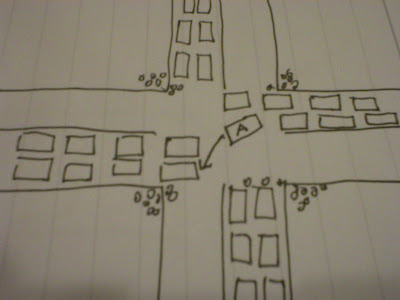 To make a left turn, it is VITAL that [A] cut off all eastbound traffic as soon as possible. The first few brave or foolish legitimate pedestrians step off the curb; this is of no concern. [A] makes his move. 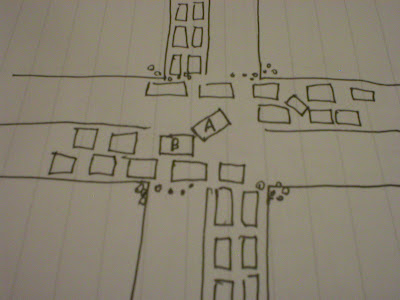 NO! Too slow! [A] has managed to partially block [B], a brand new purple and yellow Hyundai taxi, but [A] has only achieved what Beijing drivers would consider a ‘weak’ blocking position. 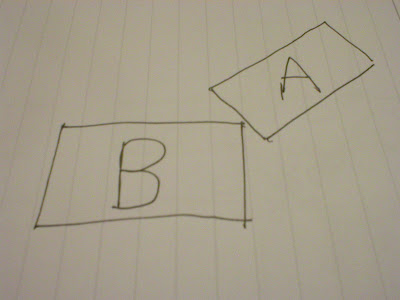 In this detail, we can see why: [A] has only inserted his left bumper and cannot move forward without contact. [B], on the other hand, is in the dominant position – by putting his wheel hard to the right and flooring it, he can fully block [A]. 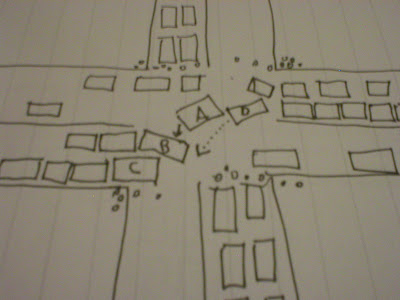 [B] proceeds to swerve right, cutting off [C], a tiny red Peugeot with a gold plastic dragon hood ornament, spoiler and assorted knobs glued on. Since [B] is just accelerating, and [C] is now decelerating, this has created a low-density ‘dead space’ in the intersection. [D], a strange blue tricycle dumptruck carrying what appear to be 40 of the world’s oldest propane tanks, sees this and makes a move. 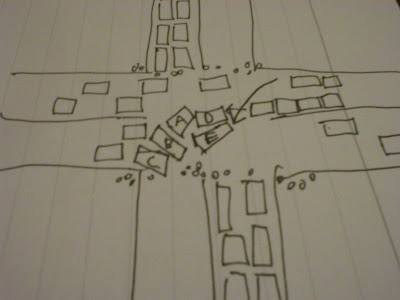 DENIED! [E], an old red taxi with its name sloppily stenciled in white on its doors, has boldly cut across two lanes of traffic, behind [D], and then swerved right, driving [D] into an extremely weak position behind [A]. Meanwhile, [B] and [C] are still fighting for position, with [C] muscling his way into the crosswalk. The only thing between [E] and a successful left turn is a few lawful pedestrians. [E] steps on the gas… 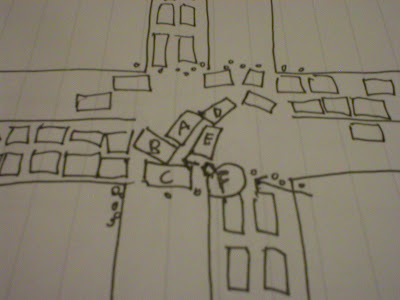 …and is cut off by [F], an elderly man pedaling his tricycle verrrryyy slooooowwwly with a 15-foot-diameter sphere of empty plastic cooking oil bottles bungee-corded haphazardly to the cargo area. He was part of the lawful pedestrians, but seeing the stalled traffic, decided to cut diagonally across the intersection. Not only has [F] blocked [E], he is headed straight at [B], giving [C] the edge he needs. 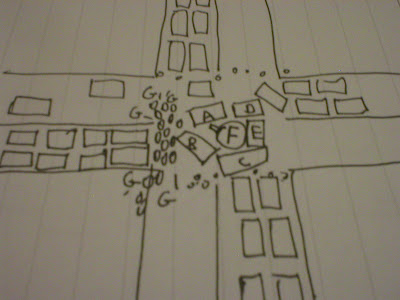 [B] concedes to [C], who drives in the crosswalk behind [F] and blocks [E]. Meanwhile, [G], a herd of about 20 bicycles, mopeds, pedestrians and wheelbarrows, sensing weakness in the eastbound lane and seeing that much of the westbound traffic is blocked behind [D], breaks north against the light. [F] pedals doggedly onward at about 2 miles per hour, his face like chiseled marble. 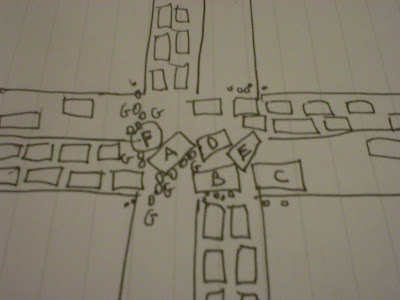 Now things get interesting. [C] has broken free and, as the first vehicle to get where he was going, wins. [E] makes a move to block [B] but, like [A] at the start of the left turn, only gains a ‘weak’ block. [A] has cleverly let [F] pass and guns into a crowd of [G], which both moves [A] forward and drives some [G] stragglers into the path of [D], clearing [A]’s flanks. Little now stands between [A] and a strong second-place finish. 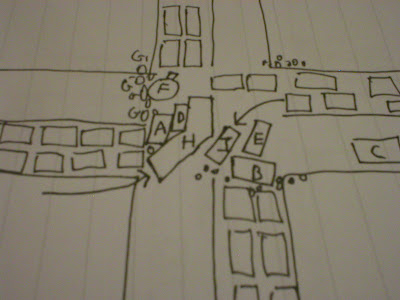 Except for public bus [H], one of those double buses with the accordion-thing connector. [H] has been screaming unnoticed along the eastbound sidewalk and now careens dangerously into a U-turn. This doesn’t appear to concern the 112 people packed inside and pressed against the windows (although that could be due to a lack of oxygen.) [H] completely blocks both [A] and [D]. On the other side of the intersection, [B] has swerved into the lawful pedestrians (who aren’t important enough to warrant a letter) and has gained position on [E].

[E] has forgotten the face of his father: He was so focused on his battle with [B] that he lost sight of the ultimate goal and is now hopelessly out of position.

This clears the path for dark horse [I], a blue Buick Lacrosse, to cut all the way across behind [H] and become the second vehicle to get where he was going (and the first to complete a left turn), since [F] has changed his mind again and is now gradually drifting north into the southbound lanes. But everyone better hurry, because the light is about to change… 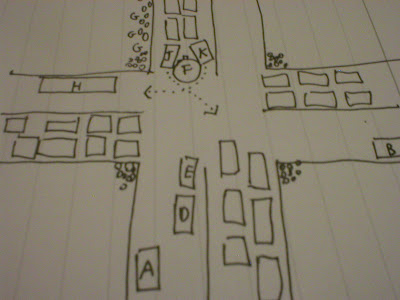 And we’re ready to start over.

Link to original blog post:  So I’m Going to China