April 22 marks two important birthdays. The first is the 100th anniversary of the the Chinese Bible. On this day in 1919, the first edition of what has come to known as the Chinese Union Version (CUV) was received from the printer.

In September of last year, I had the opportunity to edit an issue of the ChinaSource Quarterly on the topic of the Chinese Bible. What follows is a re-post of the lead editorial I wrote.

When someone speaks of the Chinese Bible, they are most likely referring to the Chinese Union Verson (CUV), or Heheben (和合本) as it is called in Chinese, since it is the most commonly used translation among Chinese Protestants, both in China and worldwide. Opinions on the CUV are strong and run deep. Many foreigners dislike it, citing the inadequacy of the translation and its archaic language. Chinese believers, on the other hand, retain a deep affection for the CUV, despite its problems. It carries a weight of authority that other translations do not.

Next year, 2019, will mark the 100-year anniversary of the CUV, so here at ChinaSource, we thought now would be a good time to take an in-depth look at the Chinese Bible.

In the lead article, Dr. Kevin Xiyi Yao examines why, despite much criticism, the Chinese Union Version remains popular among Chinese speakers, not just in China, but worldwide. Similar to the King James-version-only attitude that long prevailed in the English-speaking world, the CUV is viewed by Chinese Protestants as having an authority that other versions lack. Dr. Yao unpacks the factors that account for the staying power of the CUV.

Mark Strand contributes two articles to this issue. In the first, he traces the history of the CUV. Setting its development within the cultural context of valuing the written word, he shows how the translation of the Bible was a prerequisite to winning converts. Reflecting on the work of translation teams and the lasting impact of the CUV, Strand identifies key lessons learned from the history of Bible translation in China.

In his second article, Strand identifies the challenges faced by Bible translators and subsequent word choice errors. The challenges were often rooted in the fact that the theological concepts were new, thus there were no existing words for them.

Since 1988, Amity Press in China has printed more than 75 million Bibles. Does that mean there is no longer a shortage of Bibles in the country? If there is still a shortage, what are the strategies for addressing that shortage? In my article on the availability of Bibles in China, I try to make some sense of the statistics and the factors that affect availability. I also present the differing perspectives of those who bring Bibles in from the outside and those who source Bibles from inside China.

Ben Hu, a pastoral intern in China, offers a personal reflection on the difficulties of trying to shift the church away from the CUV towards more contemporary translations. While he uses a modern translation for his personal study and believes the church should make the shift, he does not see it happening anytime soon.

Many Protestants, both Chinese and foreign have little knowledge about the Bible used in the Catholic Church in China. Dr. Monica Romano, a lecturer at the Pontifical Gregorian University in Rome, Italy, provides a fascinating historical overview of the efforts of the Catholic Church to translate the Bible into Chinese.

The final article is a review of a short biography of Robert Morrison, one of the earliest Protestant missionaries to work on Bible translation. The story of Morrison’s faithfulness amid great difficulty is one that still encourages and challenges us today.

We wrap up this issue with a list of places (both online and offline) where one can get a Chinese Bible.

And the second birthday today?

Eight years after the Chinese Bible was published, my mom was born in the upstairs bedroom of a parsonage in a small town on the Minnesota prairie. As you can see, she loves China (she’s been there 10 times). 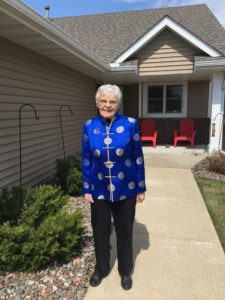 Happy Birthday, Gracie! Here are 9 Things You May Not Know About Her

A Birthday Fit for an Empress