Today marks the anniversary of the death of former Chinese Communist Party leader Hu Yaobang in 1989, the first in a chain of events (death, mourning, protest, crackdown) that would culminate in the violent crackdown in Tiananmen Square on June 4.

Today’s anniversary, while obviously not commemorated in China, is an important reminder of the sensitive nature of a number of key events in Chinese history whose anniversary will be marked this year. 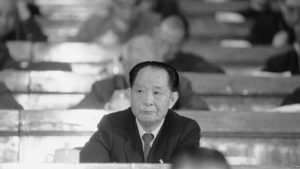 What follows is a re-post of a piece that I wrote for ChinaSource last month.

While calendars play an important role in all cultures, societies, and political systems, one unique feature of the Chinese political calendar is the prominence of sensitive anniversaries. The approach of these anniversaries often means increased security measures, tightening of regulations, and even the slowing down of the internet. In other words, sensitive anniversaries make the party-state very nervous. This was illustrated in a recent article in The New York Times, about speech by Xi Jinping to Party officials in Beijing, in which officials were told to “batten down the hatches.”

Whether dealing with foreign policy, trade, unemployment, or property prices, he declared, officials would be held responsible if they slipped up and let dangers spiral into real threats. “Globally, sources of turmoil and points of risk are multiplying,” he told the gathering in January at the Central Party School. At home, he added, “the party is at risk from indolence, incompetence and of becoming divorced from the public.”

The calendar does not bode well for 2019, since it is a year of multiple sensitive anniversaries. Being aware of these impending anniversaries is helpful in understanding events in China during the coming year.

March 10 (1959).  This dates marked the 60th anniversary of the People’s Republic of China taking full control of what is now the Tibet Autonomous Region (TAR). For the Tibetan government in exile it is regarded as the day that Tibet was invaded; for the Chinese government, it was the day that Tibet was liberated. Official celebrations in China include speeches and propaganda campaigns reminding everyone how much better off Tibetans are than before Chinese rule. However, because lingering resentment remains, along with a nascent separatist movement, in the TAR itself, security is ratcheted up, even to the point of closing Tibet to foreign tourists for several months.

May 4 (1919). 100 years ago saw the beginning of what would be known as the May Fourth Movement, as students in Beijing demonstrated against the government’s weak response to German colonial areas being given to Japan as part of the Treaty of Versailles. Beyond the anti-colonial, and thereby nationalist sentiment that sought to dislodge the foreigners from their concessions and treaty ports, the movement also called for the modernization of Chinese society and politics. While the party-state has generally praised the movement and sought to praise its “spirit,” the notion of a repeat of students demanding political liberalization makes them nervous.

June 4 (1989). This is arguably the most sensitive date on the Chinese political calendar, as it is a date and event that the government would prefer everyone forgot about. It was on this date that the army was called in to crush the demonstrations that had been taking place in Tiananmen Square in Beijing since April. Because of the extreme sensitivity of this anniversary, the internet filters are often dialed up in the run-up to to June 4, often to the point of banning the date being mentioned at all. The date, June 4, in Chinese is rendered as liu-si, literally six-four. Try typing those numbers together and a post may disappear. Some politically active netizens try to get around that by referring to May 35. It always seems like the government breathes a sigh of relief when this anniversary is behind them. That is likely to be even more so this year, the 40thanniversary.

July 5 (2009). Given the recent crackdown in Xinjiang, this ten-year anniversary of the ethnic riots in Xinjiang is likely to be even more sensitive than normal. The riots broke out in Urumqi, the capital of Xinjiang, following an violent incident between Uighurs and Han Chinese at a factory in Guangdong Province that was triggered by a false report of a rape. Believing that authorities had not provided adequate protection for the Uighurs, protests were launched in Urumqi; these eventually turned into some of the most violent Han-Uighur ethnic violence that the country had ever seen, thereby shattering the China’s carefully crafted image of ethnic harmony. The official death toll of the riots was 126, but Uighur rights groups claim it was much higher. This even really marks the point at which things took a darker turn in Xinjiang.

October 1 (1949). Finally, we have the mother-of-all anniversaries, the 70thanniversary of the founding of the People’s Republic of China. It was on this day that Chairman Mao Ze-dong stood atop the Gate of Heavenly Peace that overlooks what is today Tiananmen Square and proclaimed the birth of the new nation. No doubt Xi Jinping will want to throw a massive party and military parade in Beijing celebrating 70 glorious years. The last such parade was for the 60thanniversary in 2009. As a preview of what to expect, you can view that parade in its entirety here. Because of the importance of this anniversary, much of the news out of China in the coming months will need to be understood in its light. The Party typically sends out the order to every official from Beijing to the smallest village that they will be held responsible for any trouble that takes place in their jurisdiction in the run-up to the date. As a result, it’s reasonable to expect that the lockdowns will become much tighter. 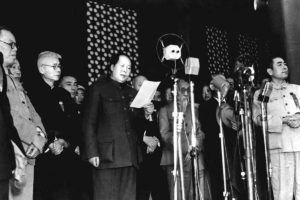 Unfortunately, while it is tempting for those of us engaged with China to hold out hope that things may settle down or loosen up in the coming year, a glance at the calendar suggests that is unlikely.

It’s going to be a sensitive year.