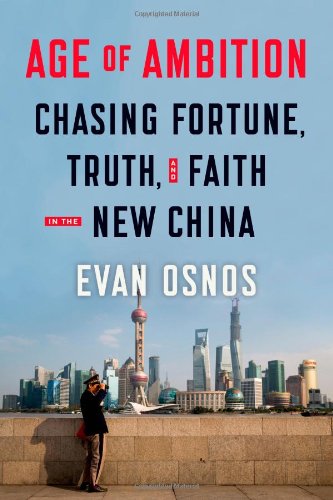 As readers of this blog will know, I’m always on the lookout for a new book that will find its place onto my current “must read” list. And while I have yet to actually read  Evan Osnos’ new book “Age of Ambition: Chasing Fortune, Truth, and Faith in the New China” (it was released just yesterday and my copy is on its way) I’m reasonably sure it will make the list.

I say that because I have followed the work of Osnos for years, and consider him to be one of the more astute observers of contemporary China. Combine that with great writing, and you’ve got a winning combination.

This morning the website On Faith published an adaptation from the book in a piece titled Five Things You Need to Know about Faith in China. Here is the introductory paragraph:

“Evan Osnos, a staff writer at The New Yorker, lived in Beijing from 2005 to 2013. His new book, Age of Ambition: Chasing Fortune, Truth, and Faith in the New China, is an inner history of China’s transformation, told through the eyes of men and women at the center of it. Osnos writes that, beneath the physical changes, China’s rise is a story of spiritual revival comparable to America’s Great Awakening in the nineteenth century, an attempt to fill ‘a hole in Chinese life that people named the jingshen kongxu — ‘the spiritual void.’’ In this adaptation from Age of Ambition, he explains the five essential dynamics in China’s quest for meaning.”

And here the five points Osnos makes about faith in China:

“The Cultural Revolution destroyed China’s old belief systems, but Deng Xiaoping’s economic revolution could not rebuild them. People who had learned to believe in a force larger than themselves were left to set out in search of their own faiths.”

2. After the almighty yuan, what?

“In sprinting ahead, China had bounded past whatever barriers once held back the forces of corruption and moral disregard. People did not trust the institutions around them: the Party, the press, big companies that had failed to provide safe food. People are placing their faith elsewhere.”

“The Party is under increasing pressure to change the way it regards the desire for faith; China today has sixty to eighty million Christians, a community as large as the Communist Party. Li Fan, a secular liberal writer, told me, “Christianity has probably become China’s largest nongovernmental organization.”

4. The Other Xinjiang: Xinjiang and Tibet are boiling

“China’s ethnic and religious politics are drifting toward a crisis.”

“For new sources of meaning, Chinese citizens are looking not only to religion but also to philosophy, psychology, and literature for new ways of orienting themselves in a world of ideological incoherence and unrelenting competition.”

Osnos concludes the piece with this clear-eyed observation:

“Nothing has caused more upheaval in the last hundred years of Chinese history than the battle over what to believe. Today, the Party is not allowing the growth of faith as much as it is trying to keep up with it.”

Only 48 hours until my copy arrives!

You can see the entire video here.