With the big meetings “Silly Season” is in full swing now in Beijing. Earlier in the week I wrote about some of the silly new regulations that have been enacted to keep the city harmonious for the next three weeks here: People’s Republic of No.

Shortly after I wrote that, the government sent word to all taxi companies that they were to disable the back seat windows. Under no circumstances are passengers to be able to open them. Apparently they are afraid of people throwing anti-government leaflets out of the window. Of course, this has never happened here, and I don’t know a soul who would even think of doing such a thing, but I guess you can’t take any changes.

Yesterday I rode in 4 different taxis and had the chance to see the implementation of this rule up close and personal. In each case I climbed into the back seat, and lo-and-behold the window handles were not there. 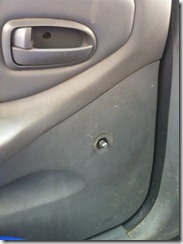 I decided to play ‘dumb foreigner’ (not a tough acting job, mind you) and ask the driver about it. The conversation went something like this:

Me: Mr. Driver, why are the handles to operate the windows gone from the doors back here?

He: Because the Party Congress begins next week. We were ordered by the government to remove the handles so the windows can’t be opened.

Me: I’m sorry. I am a dumb foreigner. I don’t understand the relationship between a government meeting and a taxi window.

He: It’s a security measure.

Me: Security measure? Security against what?

He: It is to prevent people from throwing anti-government leaflets out of the window.

Me: What? Has there been a problem with people throwing anti-government leaflets out the window?

He: No. It’s a preventative measure. If someone wants to, this will prevent them from doing so.  The government has said they have a goal of “an incident-free meeting” and so we all have to do our part. We aren’t just trying to prevent someone from doing something; we are trying to stop them from thinking about doing something.

[I’m sure there was some logic in that statement somewhere, but for the life of me I couldn’t find it.]

At that he chuckled.

In addition to the window handles, the government also banned toy airplanes and helicopters and yesterday notified pigeons that they are not to fly above a certain height.

The silliness has not gone unnoticed on Chinese social media sites either. Tea Leaf Nation translated this post on Weibo, China’s version of Twitter:

I know you think I’m making all this up, but be assured I am not.  It’s the fun thing about China. Reality trumps anything a wild imagination could dream up. Every time.

Some perspective, however…. I was here in the run up to and during the Beijing 2008 Olympics, and many of these measures were put in place then as well. Not the windows, thing, though. I guess that was all just a dress rehearsal for this event.

The Wall Street Journal has a good slideshow of all the fun.