Those of you who have lived in China, especially “back in the day,” may remember the venerable Flying Pigeon bicycles. You know, the ones that were huge, built like a Mack truck, and functioned as local pick-up trucks. Maybe you even rode one. I still have vivid images in my mind of tall teammates riding these tall bikes through the streets of Zhengzhou and Changchun! 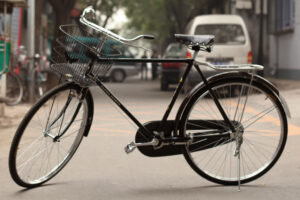 At one time, they were the most popular bike in the world, owing mainly to the fact that in a nation (China) where the bike was the main form of transportation, there were only 3 brands to choose from, one of which was the Flying Pigeon.

I just finished reading a book called Last Flight of the Pigeon: A Journey Across China by Bicycle, by Simon Clode, a Beijing-based British civil servant who decided — somewhat on a whim — to try to find and ride a Flying Pigeon bicycle across China from Beijing to Kashgar, a distance of 5000km (3100 miles). He made the trip in 2014. 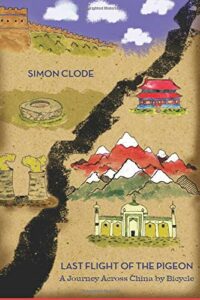 His first hurdle was actually finding a Flying Pigeon; they have since been replaced by sleek and modern bikes designed to be lightweight and fast. Writing in the introduction, he prefaces his search this way:

My predicament with popularity involved a bicycle. The most popular bicycle in history. It should not be a difficult task to buy the most popular bicycle of all time. It especially shouldn’t be such an imposition in China, where the bicycle was made. At no point on this particular customer journey should I have been required to speak with a man in Barcelona.

And with that I was hooked.

You’ll have to read the book yourself to find out. (note: be prepared for some salty British English!)