On a mid-April day in 2013, I heard a news report about an attack on US State Department personnel in Afghanistan in which 5 Americans were killed. I held my breath and said a prayer because a friend of mine from childhood, Jonathan Addleton, was at the time a diplomat in Afghanistan. In due time details of the attack emerged and I learned that, although he had been in the group that was attacked, he was unhurt. Unfortunately, however, his interpreter, a fellow diplomat, and 3 soldiers were killed. I was relieved that he was OK, but grieved for those who had lost their lives.

Jonathan has written about his year in Afghanistan in a book titled,  The Dust of Kandahar: A Diplomat Among Warriors in Afghanistan. 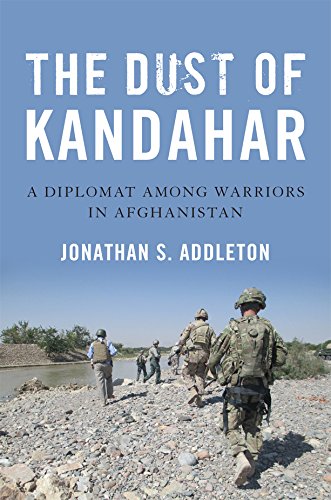 The Dust of Kandahar provides a personal account of one diplomat’s year of service in America’s longest war. Ambassador Addleton movingly describes the everyday human drama of the American soldiers, local tribal dignitaries, government officials and religious leaders he interacted and worked with in southern Afghanistan.

Addleton’s writing is at its most vivid in his firsthand account of the April 2013 suicide bombing attack outside a Zabul school that killed his translator, a fellow Foreign Service officer and three American soldiers.  The memory of this tragedy lingers over Addleton’s journal entries, his prose offering poignant glimpses into the interior life of a U.S. diplomat stationed in harm’s way.

This book is not about the policy or politics of the war in Afghanistan; rather it is a an account of the people who all play their own role in the unfolding events.

We often imagine that the life of a diplomat is glamorous, but what comes through in this book is a certain ordinariness of duty. His days are filled with meetings, briefings, and trips on Blackhawk helicopters. The duty brings sadness as well; most days end with ramp ceremonies to honor those who have been killed in action.

For a fascinating glimpse into the life of a diplomat, I highly recommend this book.

Thanks, Jonathan, for your service to our nation!