For a long time, friends and colleagues of mine have urged me to write a book about China. “You lived in China for nearly three decades,” they say. “Surely you have something to say.”

My standard reply has been that there are so many books written about China each year; I don’t want to write one until and unless I have something new to say — some angle or perspective or story to tell that hasn’t been told.

In March 2012, I travelled with my friend Noël Piper to Sichuan Province. We dubbed our trip “The Esther Expedition” because we were researching the life and work of Esther Nelson, a woman from our church who had served as a missionary in that region from the 1920s to the 1950s. It was during that trip that I stumbled onto an untold story.

It was the story of an 126-year-old American bell hanging in the steeple of a church in a remote city of Sichuan. If you were reading my blog then, perhaps you remember my post about that discovery.

In the months between that discovery and moving back to Minnesota, I travelled around China looking for more bells. I found bells from Germany, France, and Russia hanging in Protestant, Catholic and Orthodox churches.

Well, it has taken me almost five years, but I have finally put the stories of these bells into a book: “The Bells Are Not Silent: Stories of Church Bells in China.” 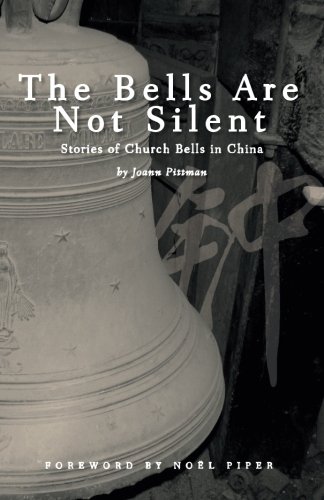 Here is the description from the back cover:

When Joann discovered a 126-year-old bell hanging in a church in southwest China she knew that there was a story to tell. Who had decided to ship it? How had it been transported? How had it survived the political turmoil of the 1950s and 1960s? She also knew that if there was one bell, there must be others. Over the course of eight months she travelled around China looking for old church bells, finding ones from France, Germany, Russia, and the United States. This book is a collection of stories about those bells. But more importantly, they are stories of God’s faithfulness to his church in China.

It is now available on Amazon in both print and kindle editions.